Many people assume wolves are evil and scary outright. Although they can be very dangerous, especially when in the wild, they also have their soft side. 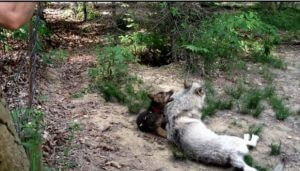 Most people think of wolves as just outright ferocious animals and believe they lack any sort of feelings. Not many people know that they can simply be huge and fluffy, so you will be surprised by what happened when Smokey, the 137 LBS wolf hybrid, met the 20 LBS German shepherd puppy.

It was a show of sweetness between two buddies, a ten-week-old German Shepherd puppy, and the seven-year-old Smokey the wolf hybrid. 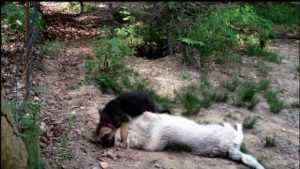 Wolves are like the wild cousins of dogs, plus smokey is a hybrid – a 71% Timber Wolf and 29% Malamute mix. So we can say it was the wolf’s paternal instinct kicking in as he was so friendly with the German shepherd pup.

Whatever the case may be, the video showed a sweet interaction between the wolf and the puppy.  Nobody could have expected a giant wolf to get along with a tiny puppy or even imagined that a wolf would be friendly to other animals. 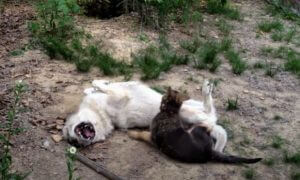 These two buddies were shown sparring, and they continued for several minutes and only took a break when Charlie needed to have some water.

After that? You guessed right! as they went back to their friendly fighting soon after Charlie’s water break. 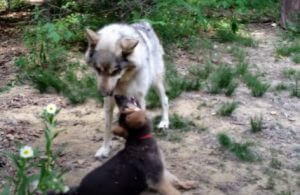 It all started when Smokey was hanging out with his dad, and the man’s son brought Charlie, his new German Shepherd puppy home.

Charlie was not one to be intimidated by Smokey’s size. He was ready to take on the giant wolf even though the wolf was well over 100 LBS bigger than him.

Smokey laid on the floor, allowing Charlie to climb him as they spared the whole time. The wolf was seen thumping his tail a few times, which meant that he was also enjoying himself. 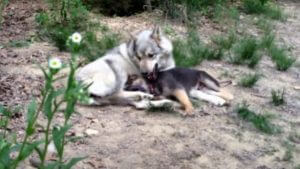 The video of these two has gone viral on the internet, and everyone won’t stop talking about the warm and fuzzy affection that was displayed between these two.

Watch the video below: