Dogs are among the rarest and most loyal animals we human beings could ever have. On the second tour of Iraq, Marine Major Brian Dennis says their hearts warmed to each other the instant they met.

They named him “Nubs”, apparently his ears had been cut off by an Iraqi soldier.

Brian would meet Nubs every time they patrolled the fort near the border and at one time found him with a huge wound on his left side which eventually healed after receiving medical attention.

Not sure he would ever see Nubs again, the major and his team was sent on an assignment over 70 miles away near the border with Jordan.

Nubs couldn’t wait for Brian’s return, so he followed the Humvees and walked the whole 70 miles in search of his favorite human.

A few days later, a marine walks up to him and tells him “you’re not gonna believe who’s outside”. Brian ran out in disbelief after hearing Nubs was outside. 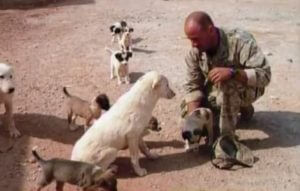 On seeing Brian, the mutt jumped on him going all crazy and happy and that’s how he became the mascot for Brian’s team. Since it was against military rules to have dogs, his commander ordered him to get rid of it.

But he couldn’t,instead , he hatched a plan to raise $5,000 to fly him over to his friends Chicago, and then home in San Diego. The response from friends and the online community was amazing. 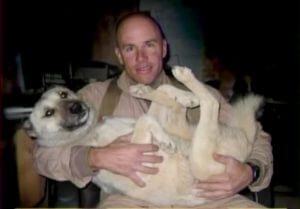 Nubs eventually got flown out and reunited with Brian a month later in March 2008. Brian took Nubs to a friend to help him and adjust and the rest is history.

This is a classic case of love at first sight and Brian being a Marine has seen his fair share of bad things happening and so has Nubs. 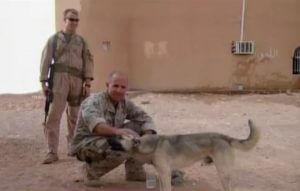 This made them perfect friends and nothing could ever separate the two again. Looking at the video Nubs is completely at ease and transformed from the violence and war in Iraq to a California dog.

Watch the video below: