It’s one of the easiest tricks to teach your dog, but it’s one that can make you look like an excellent dog trainer and make your guests smile.

Getting your dog to roll over can take as little as five minutes for a dog to learn, but it can help open the door to a huge variety of tricks that you can teach your dog. Tricks are a way for you to bond with your pup, and dogs love to learn. So, let’s look at how to teach a dog to roll over.

Why Do Dogs Roll Over? 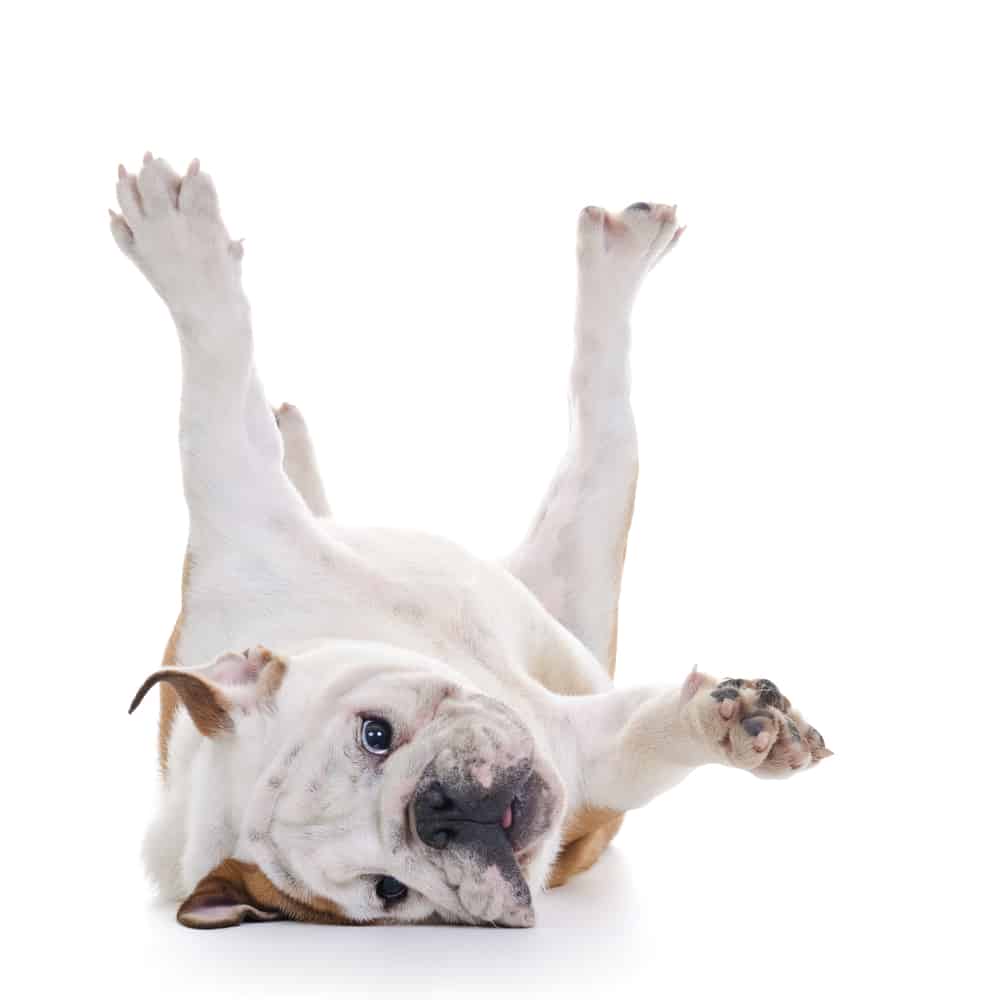 Sometimes, a dog will roll over for the sheer fun of it. When they’re happy, when they’re relaxed, or even when they’re excited, rolling over is a way of showing this. They roll over to absorb smells of things they find interesting, such as grass, or their owner’s clothes, or even gross things like dead animals.

Rolling over can be a sign of submission. When a pet exposes their belly, it shows they accept the other animal, or person is in charge. It’s a sign of respect. It can show other animals or humans that they’re not being threatening. It’s a way of saying “look! I rolled over because I’m sweet and gentle!”

How Long does it Take to Teach a Dog to Roll Over?

A professional dog trainer can get a dog to roll over in just 5 minutes. This is because they’re experienced in introducing new tricks to dogs. For the dog owner, though, it might take a little longer, but it really isn’t a trick that takes a long time to teach.

You can have your dog rolling over on command within just one trick training session, and all you need is a soft surface, like a carpet or dog bed, and a handful of treats.

How do I Teach My Dog to Roll Over?

We’ll now go through a step by step guide to teaching your dog to roll over. Don’t worry if your dog doesn’t get it straight away; the important thing is regularity and keeping it fun!

1. Set Aside the Time and Space

When you’re looking to teach your dog a new trick, you should make sure that you have the time to dedicate to the training session. Don’t worry if your dog sees this as bonus playing time. It might take a little time for him to understand what’s going on, but he’ll get there in the end.

Your bulldog quickly becomes an expert at reading every single cue that you give him. Whether it’s reaching for his leash as a signal he’s going for a walk, or opening the pantry door telling him he’s going to be fed, he will pick up on this kind of cue. Getting out the treats can become a verbal cue “verbal praise” for your pet that training’s about to begin!

2. Get Your Dog to Lie Down

This is one of the tricks that your dog should already know, as we discussed earlier. Getting your dog to lie down on command is the kind of dog trick that they’ll have mastered as a puppy if you’ve spent time getting them to do so.

3. Get the Treats Out

Hold a treat by your dog’s nose. Don’t let your dog have the favorite treat, but make sure he’s interested in it. That shouldn’t be too difficult! Then, move your hand holding the treat down your dog’s body, toward his ribcage. When you move the treat, his nose will follow it, and he’ll turn his dog’s head so he looks over his shoulder. When he starts to lean, reward him with the treat.

Once again get your dog to follow the treat from nose to ribcage and after a couple of tries, he’ll soon associate this movement with the reward. Then begin to move the treat not just down his body but over his belly, so he has to reach around for it, and flops over into a roll.

Once he’s comfortable rolling onto his back for the treat, then bring the treat right over his body so that he performs the full 360 degree movement. Well done! You’ve just taught your dog to roll over! Don’t forget to reward him once more with a treat for having done such a good job.

Now that you’ve got your dog to roll over, keep practising with his dog treats, but now say roll to roll over. Use the words “roll over” as he performs the trick like rollover trick, hardest tricks, fun dog trick, fun trick and a difficult trick is rewarding him with the treat every time. Now, he won’t just associate the rolling with a hand signal, but with the command itself so that if you keep practising, eventually he’ll roll whenever you ask!

At first, the treat is vital. It shows your dog that he’s getting it right. When he gets it wrong, don’t yell at him or he’ll just become confused. Instead, repeat the action over and over, giving him the treat only when he gets it right. It’ll soon click!

Once he’s cracked it several times, gradually phase out the use of treats altogether in this trick. Consistently using treats when teaching your dogs tricks can lead to a very chubby puppy but it’s not just that. You’re looking to instill the command into your dog’s memory so that she performs the trick without needing the treat as a reward.

Your dog should never be made to feel scared or ashamed if he doesn’t get a trick right away. Baby steps! We all took time to learn things when we were young, whether that was learning to read, or walk, or hold a fork in our hand to eat our dinner, and it’s unlikely we were rewarded with a treat every time.

When you teach your dog to roll over, remember that simply rolling to expose his belly means that he’s trusting you a lot! So make sure to keep your voice encouraging, and full of dog praise. As much as dog training involves plenty of treats, it also involves plenty of praise and a lot of cries of “good job!” and “good boy/girl!”

It can take several times of trying before your dog gets the hang of a trick, but don’t give up. Repetition is a vital part of the learning experience with any pet. 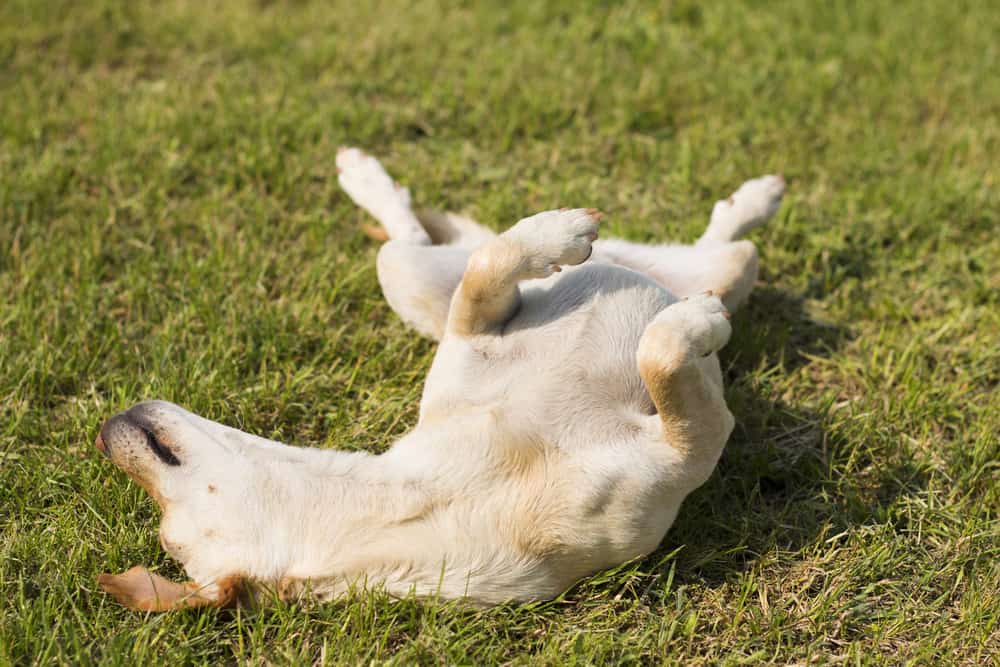 What’s the Hardest Trick to Teach a Dog?

It’s difficult to know which exercise or trick is the most difficult to teach your dog, because all dogs are different. Dog training is a process that is often surprising and can even be frustrating.

It’s thought that the “play dead” trick is one of the most difficult to teach a dog because the clicker training is done in a similar order to that of the roll: hold a treat in your hand to your dog’s nose, then move it over his head and shoulder until he’s lying on his side. At that point, some dogs confuse this with the rollover command, so they roll all the way.

It’s also extremely difficult to get a dog to use the toilet, and very few pet owners would even attempt this trick, simply because having a dog naturally means taking it out for walks. For dog owners who have mobility issues, it can be a life-changing trick to teach, but it’s usually taught by a professional dog trainer.

Why Should I Train My Dog?

Training sessions are an important part of owning a dog and are something that you should set aside time for. It’s a fun way of keeping your pet mentally stimulated and strengthening the bond between the two of you.

It can also be something that saves his, or even your, life. If your furry friend comes back when you call him, waits on the sidewalk before crossing the road, or is even taught to fetch vital items such as medication, you and your dog are keeping each other safe.

There are times that you might forget to keep up with your dog’s training but always make the effort to go back to it. Routine is key. Getting a dog to roll over is just an example of so many different tricks you can teach your dog. Dogs love to make people happy and they love to hear praise when they’ve done something well.

When Should I Train My Dog?

Training begins as soon as you get your puppy home. It’s well known that the earlier people start with the training, the more a dog will learn. It starts with a simple command like “sit” and eventually, with the right amount of time, you can train your dog (train dog) to do all manner of tricks!