Sometimes you catch your dog sneezing and it’s the cutest thing in the world.

They look just as surprised as you are and look so adorably confused!

While the occasional sneeze can be hilarious, if you notice your dog sneezing all the time, most people might start to get worried.

Most of the time, sneezing in dogs is completely harmless and the most common causes of sneezing are minor irritants, play sneezing, or a reverse sneeze.

Sometimes though, the thing that can cause sneezing in your dog is much more serious and requires a trip to the veterinarian.

Usually, sneezing in dogs is nothing to be concerned about, or it’s s a minor issue, like mites, that can be easily treated by your vet.

Very rarely though the fact that your dog is sneezing can be a way of alerting you to something more serious like nasal tumors, canine cancers, a virus, or infections.

So how can you tell If your dogs sneeze is just a sneeze or something more serious? Keep reading to learn exactly what to look for. 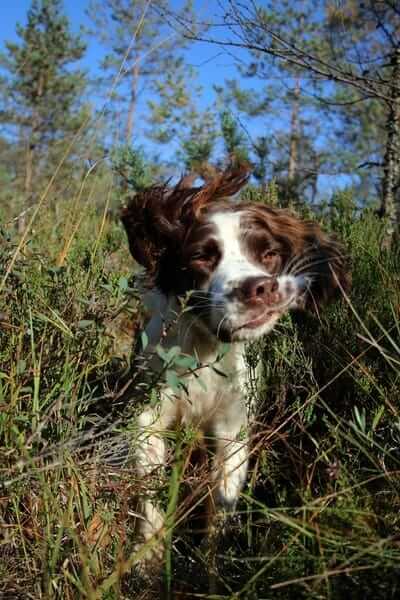 Many dogs sneeze for a variety of reasons, and an occasional sneeze every once in a while is totally normal.

A dog sneeze may be a way for a dog to show that it is ready for a more calming activity, the same way a dog may yawn or lick their lips.

You may also notice that your dog’s sneezing gets a lot worse all of a sudden when they start playing rough with you or other dogs.

This is known as play sneezing, and not only is it completely adorable, but it’s perfectly healthy!

A dog sneezes during roughhousing to let you and their other playmates know that it’s all just for fun and that it’s not a real fight.

If you’re dog sneezes a lot when you play with him, that’s a great sign! That play sneeze means that your pet is having a ton of fun! Keep it up, because they’re loving it.

Another weird sounding but totally normal sneeze is a thing known as a reverse sneeze. This means your dog is sucking air up into its nose to try to get rid of an irritant.

When a dog is sneezing like this it sounds like a loud SNORKing sound and is really common in bradycephalic dogs with extremely small nasal passages.

Little dogs like Boston terriers, bulldogs, and pugs tend to suffer from this more than other dogs.

These reverse sneezes sound alarming, but they’re nothing to be concerned about.

Why Is My Dog Sneezing So Much All of a Sudden?

So now that we know what’s normal, let’s talk about some of the more serious things that can cause sneezing in your pet.

Unfortunately, there are myriad reasons why your dog is sneezing suddenly.

If you notice that your dog seems to be itchy all over in addition to sneezing and has a runny nose, it could be a sign that your dog has an allergy to something.

Dogs have much more sensitive noses than humans do, so although we think perfumes and aerosol sprays smell good, they can really irritate your dog’s nose and cause sneezing.

If you notice that your dog is sneezing when you spray your cologne or perfume, it’s the way their body tells humans that they don’t like it. So you may want to consider doing it away from your pet.

Sometimes though, you may notice that your dog’s behavior seems different. Just like people, animals tend to act differently when they’re not feeling well.

If you notice them behaving oddly, there could be many reasons for it from allergies, to infections, to dust particles or nasal mites, or objects trapped in their nasal cavity.

When a dog is sneezing it’s usually just a sneeze, but sometimes it could mean their body and immune system are fighting off infections or more serious conditions.

What Are More Serious Causes of Sneezing?

Sometimes in addition to sneezing, your pet will also cough. If combined with a runny nose, this can be a sign of a nasal infection, an upper respiratory tract infection, or kennel cough.

Occasionally your pet may contract pneumonyssoides caninum from nasal discharge from other dogs by nose to nose contact. Although it sounds scary, it’s actually just a case of nasal mites and it’s an infection that your dog’s veterinarian can easily get rid of.

The most serious symptoms to look for in addition to sneezing are nose pain, nosebleeds, visible swelling in the location of their nose, colored discharge, or your dog continuously pawing at its nose.

Any combination of these can mean that your pet has foreign objects trapped in their nose that they can’t dislodge by sneezing.

These foreign bodies can be anything from mites to dust particles, to grass. One of the most dangerous things to watch out for are foxtail burrs.

Foxtail burrs are the angry, prickly little spurs that come off of weeds and like to dig into your clothing when you’re walking through fields. If your dog sticks their nose into it, then it gets trapped in their nasal cavity.

It’s difficult for your dog to expel these types of foreign bodies from their nasal passages because it clings to the inside of their nose. Eventually, when they start pawing at it enough, it can dislodge from the nasal passages and travel through their system to more vital organs which can result in a much more serious issue.

If your dog seems unhealthy, has a lot of nasal discharge, is suffering from irritants, and you can tell that their sneezing isn’t just reverse sneezing (which sounds like a loud SNORK sound), you should take them to the vet for a check-up.

When Should I Take My Dog To The Vet For Sneezing?

If at any point you hear your dog make a honking noise, which is not to be confused with the snorking sound a dog makes when reverse sneezing, get them to the vet right away.

You may also notice that this may cause them to suddenly seem to have difficulty breathing, get quickly winded when exercising, or they might have a blue tinge to their gums.

These things may lead to a rare, but very serious, condition known as tracheal collapse, which is most common in small breed dogs and it causes a severe airway obstruction.

If you suspect your dog may be suffering from tracheal collapse, take your dog to the veterinarian immediately.

Another very serious disease is the canine influenza virus, which just like the human flu is an infection in a pet’s upper respiratory tract.

It is a highly contagious disease that can be easily transmitted in close quarters, such as boarding kennels.

What Can You Give A Dog For Sneezing?

The first thing you should always do if you notice your dog has excessive sneezing or potential allergies is to try removing various things that may be causes of their allergies.

Some dog owners may not realize that a common cause of dog allergies are the proteins in their pet food. Some can cause an adverse reaction and can be an irritant to their systems.

If switching out your pet food and cookies doesn’t seem to help, check the site in the house where they sleep or spend the most time.

You may notice an excessive amount of dust or you may find that the stuffing from their bedding is the cause of their allergy symptoms as it can be an irritant to their noses.

If their behavior hasn’t changed and they don’t have any discharge, signs of infections, and they’re not rubbing their nose excessively, then a common household irritant is the most likely reason for their sneezes.

Another thing to note is that cigarette smoke can severely affect the air quality in your house and second-hand smoke your dog inhales can cause several bad things to happen in their body.

Depending on your dog’s age and breed, humans smoking near them can cause nasal tumors in dogs. This can be discovered by blood tests to check their blood count for anomalies by their vet.

Can I Give My Dog Benadryl For Sneezing?

You should always consult your dog’s veterinarian before giving your dog any human medications as they may cause allergic reactions.

Generally sneezing is mild and will go away on its own without any need for medications.

While Benadryl is generally considered safe for most dogs, sneezing in dogs can be a sign of an underlying issue that should be treated.

Since Benadryl only gets rid of the symptoms that cause sneezing and not the actual issue, it can actually be detrimental to your dog if they have a more severe underlying condition, like infections or tumors.

However, it is safe for dogs in small doses if their sneeze is just caused by allergies and your vet recommends it.

For most dogs, you’ll want to give them 1mg for every pound they weigh up to 2-3 times a day, though to avoid their swallowing reflex you may want to coat it in peanut butter to get them to take it.

If you liked this article, please feel free to share!