While it isn’t necessarily an immediate health emergency if you’ve noticed your dog coughing after drinking water, this is definitely something you’ll want to pay close attention to all the same.

Because dogs do not sweat they need to stay hydrated to better maintain their body temperatures.

It’s not at all uncommon for dogs to drink entire bowls of water when they are particularly hot or thirsty – and if they go too fast, it’s not uncommon for them to start coughing, either.

At the same time, there are some medical issues that can be diagnosed early by getting out in front of your dog coughing after they have had a drink of water.

We dig a little bit deeper into the ins and outs of these medical issues, why your dog might be coughing after hydrating, and how to best move forward from here below.

Let’s get right into it!

Why Is My Dog Coughing After They Drink Water?

There are a couple of different reasons your dog might have a coughing fit after drinking water, with the most common reason being your dog drinking water to quickly and triggering the cough reflexes all mammals have built-in.

Secondly, you might notice your dog cough after drinking when they are dealing with something called “kennel cough”.

This contagious condition is more than a little bit annoying to have to deal with – but it isn’t (usually) life-threatening and almost always dissipates in two to three weeks.

Another reason you might be dealing with a dog coughing could involve their trachea, particularly a condition known as a “hypoplastic trachea” or a tracheal collapse.

Different dog breeds are more susceptible to this condition than others, it is usually seen most often in older dogs, but that’s something we’ll get into a little more in depth below.

Most of the time, though, just because your dog coughs after drinking doesn’t necessarily mean that it’s a full-blown medical emergency. 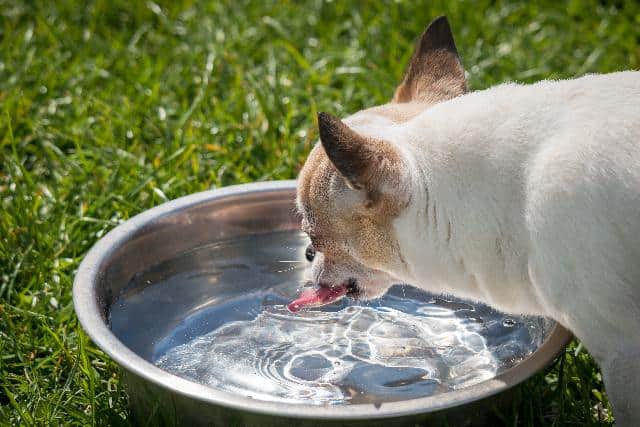 Like we just mentioned earlier, there are a bunch of different reasons that your dog may be dealing with a coughing fit.

Let’s run through the most common causes of your canine cough problems right now.

Water or Debris Making Its Way Into Their Windpipe

Most of the time that dog started cough after drinking any amount of water that they simply have drank too much too quickly, triggering a coughing fit.

Any extra water working its way into a dogs respiratory system is going to be an issue, and it’s one that’s going to make them cough (just the way we would with water in our windpipe).

On top of that, it’s not like dogs are drinking water out of a glass.

Sometimes they steal drinks from a puddle, sometimes a stream, sometimes from a swimming pool, and sometimes even from a toilet bowl!

If they aren’t drinking 100% of the time from their water bowl it’s possible to suck down a bit of debris with any amounts of water, and that’s going to cause a coughing fit as well.

Your dog’s sore throat looks a lot like your own, and (believe it or not) dogs have gag reflexes – or a cough reflex – that works the exact same way that ours does.

Drink too much water all at once and your dog might start to “choke”, even though they are really only triggering their persistent cough reflex or their gag reflex and that’s what’s causing the problem in the first place.

Kennel cough issues (known in the veterinarian world as canine tracheobronchitis) can cause your dog to cough after drinking water, too.

And while kennel cough is persistent and annoying (a problem that can last a couple of weeks, if not even longer) it really isn’t any more serious than the human common cold.

The trouble with kennel cough, though, is that when your dog has it it’s almost 100% certain that every other dog you have that is going to get it, too.

That’s a lot of dog coughs to have to deal with all at once!

Kennel cough is highly contagious, with the bacteria that causes this medical condition bouncing from one dog to the next with absolutely no trouble whatsoever. Worse, the coughing always gets worse before it gets better – which can cause your dog a lot of discomfort (even if it isn’t going to threaten their life long-term).

The important thing to do if your dog has kennel cough is to separate them from any other animals in the direct vicinity. This allows you to minimize the amount of transfer, protecting other dogs from getting kennel cough, too.

If you have a younger dog that starts to choke or cough shortly after taking a sip of water without any other symptoms you may be dealing with an animal that has a hypoplastic trachea.

Hypoplastic trachea issues usually present themselves around five or six months of age, though certain dogs won’t show signs of having this condition until they are two or three years old.

What happens here is that the cartilage rings in the trachea of your animal simply don’t develop the way that they normally would have. Genetic predisposition causes this problem, leading to your dog having a difficult time every time they visit the water bowl – just because the shape of their trachea is a little off.

The important thing to realize here is that this issue with the trachea is genetic and will require medical treatment there usually a steroid treatment, sometimes surgery) to get the dog chokes issue under control.

Collapsed trachea issues, on the other hand, usually happen with dogs that are a little bit older.

Over time, the trachea walls begin to weaken, the flap that is supposed to cover the windpipe doesn’t do as good a job as it should come in tiny amounts of water slip through small gaps and cause the choking/coughing problem.

Most of the time, a collapsed trachea isn’t severe enough to allow bits of food to sneak through – just water – which minimizes the overall dog choking threat. At the same time, your dog is definitely going to be dealing with some discomfort when they are hacking and wheezing every time they go to drink a bit of water.

Should I Help My Dog Stop Coughing After They’ve Been Drinking?

Every time a dog because after drinking water you need to diagnose the situation on a case-by-case basis, deciding whether or not you need to intervene – and how best to intervene, too.

Here are some helpful tips to assist you moving forward.

One thing you can do pretty much any time you see a dog cough after drinking something is to try and calm them down, gently patting them to relax them and reassure them that everything is okay.

This is always going to be a very stressful situation. Most dogs are going to look to “their person” for help. Don’t be shy about coming them down by talking to them, patting them, and generally trying to get them to relax.

You never know why they are having a cough fit in the first place and you definitely don’t want to cause any extra stress or force a collapse of the cartilage rings supporting their throat and their windpipes.

Let them work through things unless you are sure that they are choking on something solid (even food). That’s the only kind of occurrence where you’ll want to physically intervene.

Is Benadryl Something I Can Give My Dog If They’ve Been Coughing?

Though you are always going to want to clear giving your dog people medicine with your veterinarian before you do so, Benadryl is one of the few people medicines that you can (generally) safely give your animal without having to worry about poisoning them along the way.

If you’re dealing with a moist cough condition that can be effectively treated with Benadryl the odds are good that your veterinarian will let you know and give you the green light.

If, on the other hand, you’re dealing with something that has little to do with allergies or kennel cough Benadryl probably isn’t going to do that much.

A collapsed trachea is genetic, remember. All the cough suppressants in the world aren’t going to help fix a collapsing trachea.

There are a couple of other things you can do to help treat your animal every time they start to cough, including:

Chicken broth added to their food can also help to soothe their throat, especially when they are dealing with reverse sneezing caused by kennel cough.

Above all else, it’s never a bad idea to make sure that your dog is getting plenty of rest following a coughing fit.

If you do believe that the issue to be something like a tracheal collapse you have to make sure you get veterinarian assistance ASAP. This isn’t anything you want to fool around with without a proper diagnosis, that’s for sure.