Pork rinds (when done well) are downright delicious – so it should come as no surprise to anyone that our dogs would love to snag some of this human food for themselves, gobbling it up like a snack at every opportunity.

At the same time, pork and dogs don’t necessarily go together all that well.

While plenty of dog food brands include pork in their recipes, there are a lot of dogs that react very negatively to pork in their diet.

Most of the time these negative reactions are nothing more than extreme itchiness and discomfort, but some dogs have a real tough time with pork to the point where they start to lose hair, start to get boils on their skin, or even start to have diarrhea and vomiting.

Obviously, that’s not ever a good thing to have happen to our favorite furry little family members.

But what about pork rinds every now and again?

Are pork rinds safe for dogs to snack on as long as we aren’t giving it to them all the time?

Or will pork skins fried up with plenty of salt (who knows what else) wreak havoc on the health and wellness of our furry little family members, ruining not only their appetite but also doing a number on their short and long-term health prospects, too? 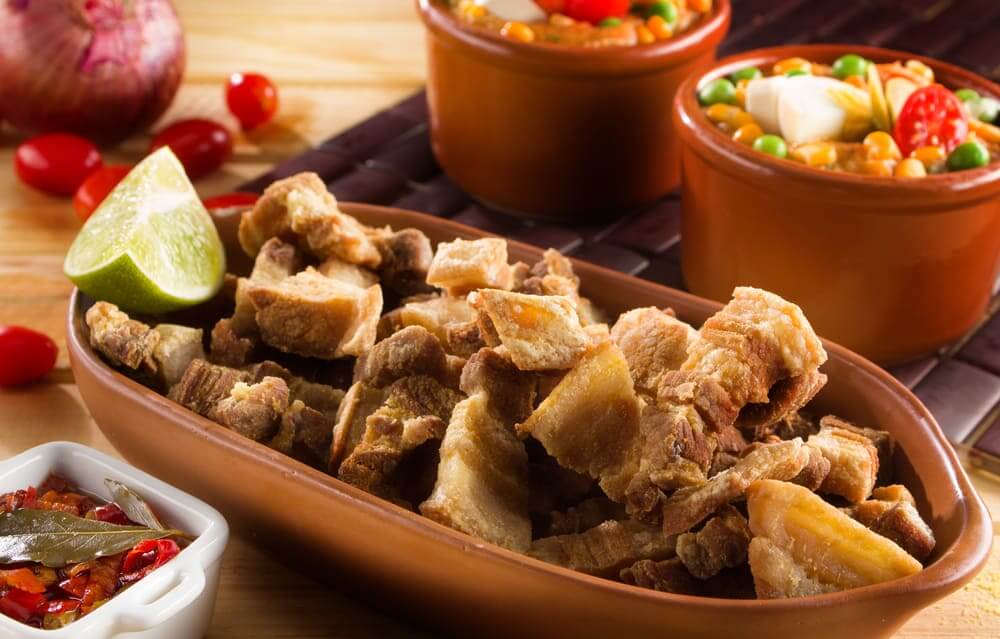 Right out of the gate we can tell you that while dogs eat pork rinds every now and again, they really shouldn’t – and you want to do everything you can to make sure that pork rinds don’t end up being a staple of their diet.

Yes, pork rinds look like the perfect dog treats on the surface (especially if your dog can eat pork without negative health effects to begin with).

We are, after all, talking about a super delicious pork crackling and pork skin snack just absolutely loaded top to bottom with overwhelming pork flavors that humans just can’t get enough of.

Of course our dogs would love this as a treat as often as they could get it!

At the same time, though, we need to recognize as a responsible dog owner that just because our dogs eat pork rinds as happily as can be whenever they get the chance we aren’t doing them any favors by allowing this kind of behavior.

The Problem with Pork Rinds for Dogs

For starters, pork rinds are (always) made from some of the worst pork cut possible – the kind of pork that isn’t going to make it into any other pork products for human (or animal) consumption.

It’s like feeding your dog or your child nothing but the stuff that barely makes it into hotdogs.

That’s something no responsible adult would do.

Secondly, pork rinds are fried beyond all oblivion – and fried foods aren’t something you want to see dogs eat.

Fried foods have absolutely no place whatsoever in a dogs daily diet.

We know fried foods do a number on the human body if that’s all a person eats, so it shouldn’t surprise us at all that would have an even worse impact on our dogs whose digestive system definitely isn’t made to handle that kind of food.

Finally, pork rinds are absolutely swimming in extreme amounts of salt, unbelievable amounts of spices, and inevitably have a lot of that cooking oil soaked right in to the rinds themselves.

Excessive levels of sodium can cause your furry little family member’s muscles to become stiff and dehydrated. That’s going to make it difficult for them to walk and to move, and all of a sudden they are going to be in a world of pain.

Extreme levels of sodium in pork rinds can actually lead to vomiting, diarrhea, muscle spasms, and symptoms that look like your dog has had too many beers to drink (another thing you want to make sure your dog isn’t consuming at all) – and sometimes these excessive levels of sodium can lead to life-threatening issues or even death.

Garlic and Onions Can Be Deadly for Dogs

Garlic is never safe for dogs to consume and this isn’t just a sensitive stomach issue, either.

Garlic is actually toxic to dogs (even in really small quantities), but it’s even more sinister in that it takes a couple of days to start to see its awful symptoms begin to manifest.

That means that your dog can be dealing with real health issues that need the help of a veterinarian to diagnose and cure for anywhere between two or three days before you even recognize that something’s wrong the first place.

Talk about a nightmare situation!

Pork rinds are also absolutely swimming in salt and sodium, which makes them absolutely delicious human food – but which also proves to be toxic to dogs, too.

No, it’s a good idea to stay away from pork rinds as much as you possibly can. 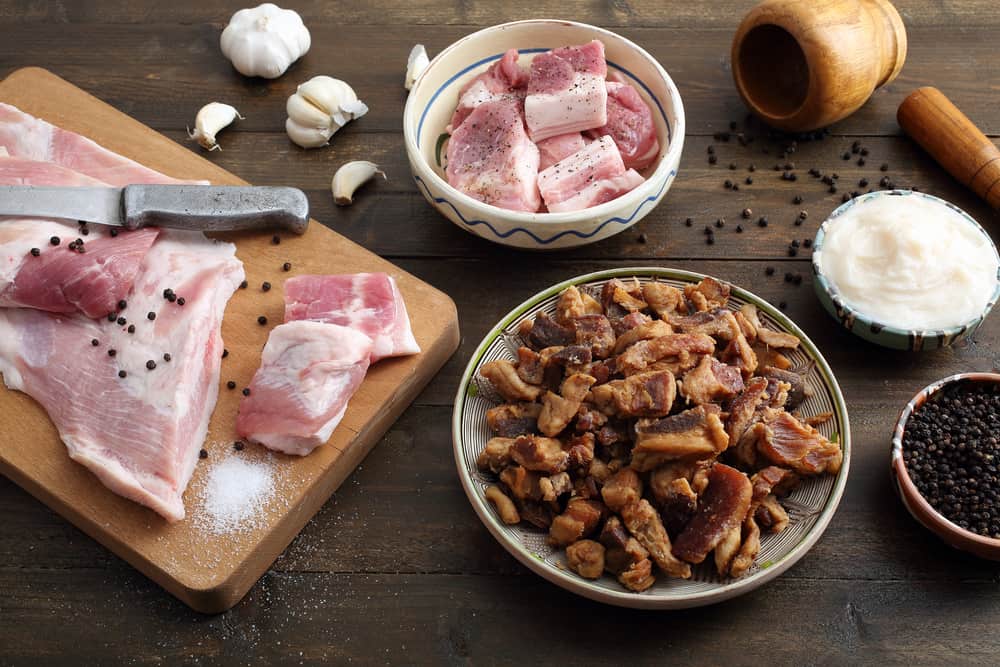 Can You Safely Cook Pork Rinds for Dogs at Home?

Homemade pork rinds (sometimes called homemade pork crackling) can be given to your animal every now and again (provided they don’t have a sensitive stomach) – but again you really need to stay on top of things here.

Rule One – No Extra Spices

Even if eating pork doesn’t present a problem for your dogs, the spices (and definitely the level of sodium included in pork rinds, and most of the pork meat that makes it into the snacks) will wreck their digestive system in a hurry.

It doesn’t take much for your dogs to react very poorly to a lot of excess spice, usually beginning with them having a difficult time breathing but then inevitably causing them to vomit or have extreme diarrhea.

All three of those issues can turn into life-threatening problems in a hurry, especially if they don’t stay as generally pretty mild issues from eating one or two rinds.

No, you need to fry up that skin in its own fat (and no other ingredients) to make it something even sort of safe for your dogs.

Secondly, you need to make sure that you are straining off as much of that fat as possible before you even think about giving it to your animals.

The last thing you want to do is jack up the blood pressure of your dog by giving them anything but standard snacks and dog foods, which is exactly what you’re going to do with this homemade concoction (even if you keep ingredients pretty limited).

Rule Three – Keep a Close Eye on Your Pooch

Finally, you need to monitor your dog every step of the way after they have eaten this homemade pork rinds concoction.

It’s crucial to make sure that they can eat these pork scratchings in very small amounts before you even think about giving them any more, double verifying that pig products aren’t going to wreck their health completely.

What About Pork Skin, Is That OK for Dogs to Eat?

Pork skin (raw pork skin, anyway) usually isn’t going to cause a lot of stomach upset for your dog, and it definitely won’t cause the kind of kidney disease or cause pancreatitis issues the way that extreme exposure to high levels of sodium or fried foods will.

But we’re not usually talking about giving dogs raw pork skins most of the time, are we?

No, usually we are talking about food that includes pork skins (like pork rinds or pork cracklings) that have been prepared with all kinds of other ingredients that we’ve already highlighted aren’t the best the world for your animal.

Can dogs eat pork skins without getting sick?

Maybe, especially if you aren’t giving it to them all the time.

Should you risk it, though?

Truth be told, probably not – and the bottom line is they definitely shouldn’t eat pork that has been fried, slathered in spices, or covered in salt. If it looks like pork rinds you want to steer clear.

That’s when you start to jeopardize the health and wellness of your dogs and is the furthest thing from giving them a treat.

You’re actually guaranteeing that the treat becomes a major medical issue later down the line.

Is Pork Crackling Bad for Dogs?

If you get that it’s not a good idea for your dog to eat pork rinds, but are wondering if they can eat pork rinds “cousin” the pork crackling – basically roasted salt pork skin that comes off of a ham (or something similar) – then we’ve got you covered.

Pork cracklings are definitely a little bit safer than straight up pork scratching or pork rinds, but you still run the risk of a lot of that salt, a lot of that fat, and a lot of those spices weaseling their way into the pork crackling and causing your dog a lot of discomfort.

Maybe if you cut the pork crackling off of the food and give it a good wash before you give it to your dogs that might not be all that bad.

As a general rule it’s probably best that you stay clear of these kinds of “dog treats” and just let the humans enjoy it instead.