It’s often all too easy to feed our dogs the kind of food we think must be delicious for them. How many times have you gazed into the large, mournful stare of a pup as he watches you eat a bacon sandwich or slice into a steak, and found his little face just impossible to resist?

I’m a sucker for big brown eyes and drooling chops. But while the occasional treat is great for your dog, you don’t want him getting fat. Even without necessarily putting him on a calorie-controlled diet, it’s always good for dog owners to consider healthy snack options.

So, what about vegetables? Can dogs eat celery? What about other apples and pears? Can dogs eat carrots? Are all the foods doctors tell us to eat more of necessarily good for your canine companion, too?

Is Celery Good for Dogs?

Celery is renowned for being somewhat of a superfood. It’s low calorie, but high in important nutrients like zinc, iron, fiber content, calcium, as well as vitamins, A, B/vitamin b6, C, D, vitamin e, and vitamin k. Humans(human foods) have been eating celery in their diet for thousands of years, not only because of its health benefits but its unique flavor, which is added to soups, salads, stews, and other meals.

But not all foods that are good for humans are good for dogs, as we know. Grapes, raisins, avocado, and even onions could all prove fatal. So, it’s good to make sure whether dog celery is food that dogs can eat.

Yes, dogs can eat celery. However, this doesn’t mean that you can toss your dog celery and watch it chomp down on a stalk. There are important things to know first about not only the preparation but the amount of the celery you feed to your dog.

I can honestly say that I run zero risks of over-indulging on celery in my own personal diet, but the same can’t be said of our dogs. For them, there is such a thing as too much celery! Some pups are little scoffers who will devour anything put in front of them, so as always it’s up to a responsible owner to moderate their dog celery intake.

While celery contains plenty of good stuff, it’s a natural diuretic, which means that too much celery will cause them to urinate more than usual. This means your dog runs the risk of dehydration and bladder or kidney issues. Vets, therefore, recommend for dogs to eat celery as an occasional treat, and certainly shouldn’t form any more than 10% of a dog’s diet.

Obviously! According to M-Dog, if your dog has any kind of reaction to celery, you should stop giving it to him. You might find that he becomes bloated or gassy if the vegetable is irritating his stomach/digestive system so if this is the case, swap the celery out for something else.

How to Prepare Celery for Your Dog 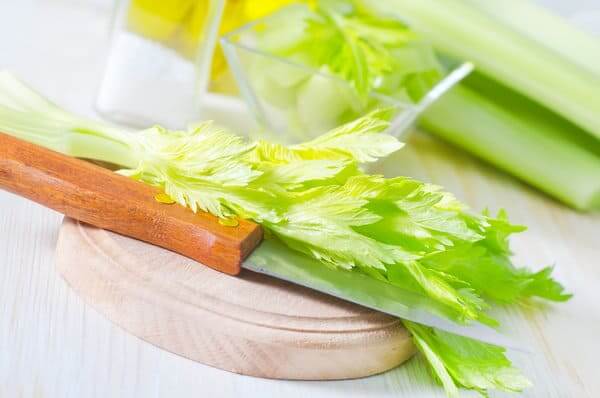 Can dogs eat celery in its entirety?

First, it’s best that your dog doesn’t eat the celery leaves. With many plants, most toxins are stored in the leaves so stick to just the celery stalks.

It’s safe for dogs to eat both cooked raw celery. Many dogs prefer cool, raw celery straight from the refrigerator, particularly on a hot day, and this method of preparation is also great as a breath freshener for your pup, too.

Some dogs are gobblers, and some are nibblers. If your dog’s a nibbler, they’ll be more than happy to take a fresh stick of celery out of your hands and gnaw away at it for a little while. However, gobblers with no self-restraint shouldn’t be given sticks of celery that could cause a choking hazard by lodging in their throats, so instead chop the celery into small pieces.

Don’t be worried if your dog isn’t enamored with either choice when it comes to celery. It’s still possible to give them the vitamins and minerals from celery without them refusing it outright. Blending the celery with other vegetables means you can feed or feeding celery without them even really noticing.

It’s a great idea to pair the celery with other flavors to see if this might tempt them, too. Spreading a little peanut butter along the celery stalk is a popular choice. Just be sure to never feed your dog peanut butter that contains Xylitol, which can be fatal.

But what if your dog just hates celery? Plenty do! Can dogs eat a carrot instead, or perhaps another healthy snack?

What About Other Vegetables and Fruits?

We’ve established dogs can eat celery, this also raises questions of other fruits and vegetables that they may be able to enjoy. Owners often take to the internet to ask such questions as “can dog eat carrots? Can a dog eat broccoli?” and “is it safe for my dog to eat fruit?”

It’s always good to check. After all, most of us are aware of just how toxic chocolate is to dogs, but who’d ever have thought grapes or raisins would be so bad(junk food) for them, or that you should never give a dog corn on the cob? Giving your dog the right treatment while keeping them safe can be a minefield, so it’s never a bad(celery bad for dogs) thing to be sure.

Let’s take a look at some other low-calorie dog foods that are safe for dogs to enjoy in their diet. We got some great tips about doggy nutrition from the American Kennel Club for this guide.

Some great vegetables to feed dogs are: 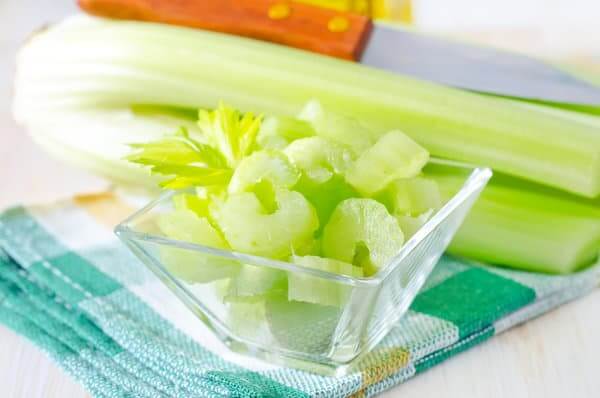 And for a fruity dessert…

Dogs can eat (and will surely love) such fruits as:

Never feed your dog any of the following fruits and vegetables:

Never Be Scared to Seek Advice!

If you’re unsure about any part of your dog’s diet, be it regarding celery safe for dogs or otherwise, always check with your vet. But if you follow the above suggestions, your dog’s sure to thank you for keeping him in the best of health!